This article was originally published on March 27, 2020, and has been republished in light of the NSW Premier's decision to close the NSW Victoria border from Tuesday 12.00am

WITH his truck laden with fruit, a Kiewa man chugged off to transport the stock to Sydney.

But his trip to the market came to an abrupt end at the Union Bridge heading into Albury.

It was there that NSW police told the farmer he could go no further.

He had been snared by the NSW government closing its border to Victoria in the early hours of January 30, 1919, to stop the spread of the Spanish flu.

Unlike this week, where there has been more than 24 hours notice from NSW they would be shutting-off their border, there was no forewarning 101 years ago.

That Kiewa fellow was left to dump his fruit on the bridge, with an Albury truck picking the food up and taking it away. 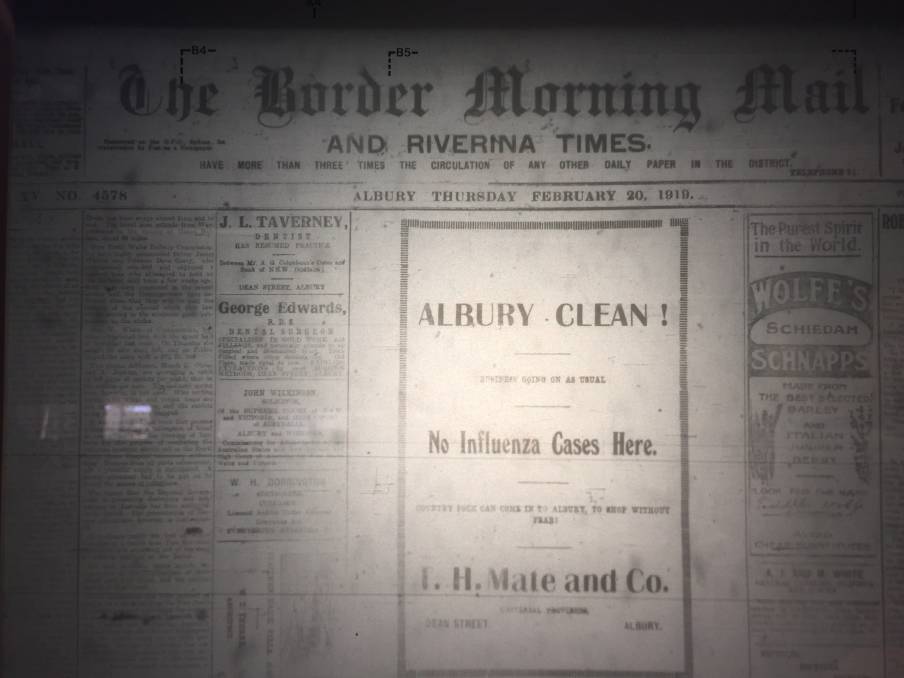 Top: An advertisement for Mate's store on front of The Border Morning Mail in February 1919 declared Albury was free of influenza and country people could come and "shop without fear".

Of course he was one of many caught in the snap closure, which saw trains and cars halted at Wodonga and mail stay in Albury.

Another man stranded had got a telegram stating his brother was not expected to live and he was dashing back to Sydney to see him.

Many hurt were those who served in World War I, including a digger who travelled from Sydney to Melbourne for a holiday and after being stuck for days was "now feeling the financial strain of his enforced stay in Wodonga", The Border Morning Mail reported.

The upheaval saw hotels overflowing in Wodonga, with a suggestion made that a rail sleeping car be brought from Albury to help accommodate the influx.

How did it get to the point where NSW decided to shut itself off from Victoria?

Professional historian Mary Sheehan, who is undertaking a PhD at Melbourne University on the Spanish flu, says it was a case of NSW wanting to flex its muscle with Victoria.

There had been an agreement in late 1918 that if two adjoining states had influenza cases there would not be a closing of borders and by January 1919 NSW and Victoria each had outbreaks.

"There was a sense Victoria was being punished for not closing their borders earlier, and they did dither to see if it was pneumonic influenza or not, and it's happening now, politicians are slow to act with a pandemic," Ms Sheehan said.

So NSW Premier William Holman jumped and in doing so led the way in shutting state borders in 1919.

"It was a disaster for the whole concept of federation because what the whole movement for Federation was about was the abolition of restrictions on internal traffic," Ms Sheehan said.

Prime Minister Billy Hughes was overseas at the Paris peace conference at the time and the federal government, based in Melbourne, took a back seat to state and local administrations on health.

"The Commonwealth had no health department and no real control or power over the states and because power and sovereignty was with the states they went their own way," Ms Sheehan said.

Police stood guard at border crossings at Mulwala, Howlong, Hawksview, Wymah, Jingellic and Bringenbrong but it did not stop people swimming across the Murray River.

Those caught around Albury were sent to a quarantine camp set up at the city's sportsground in February 1919.

There was a view the border closure and camp were overkill.

In a February 11 letter to the NSW Health Minister, Albury mayor William Cleaver Woods, a doctor, noted there had only been three cases of pneumonic influenza with one death.

He wrote it would be "most harmful to the business people of Albury" if restrictions were not lifted.

Former mayor and then alderman Stuart Logan let rip at Mr Holman at a council meeting, saying he had acted akin to a dentist who cuts your head off when you want a toothache treated.

He was irked by the Sydney-based Mosman Council urging its Albury counterpart to support its motion in "appreciation of the state government's prompt and decisive action in closing the borders against infected states".

Cr Logan reacted by saying: "The regulations passed by an imbecile government have brought confusion upon us and these people of Mosman ask us to stand behind them in destroying the liberties of citizens and commercial life between two states."

Schools, theatres and churches were shutdown, but at the same time activities continued in a broader fashion than we're now experiencing.

Sport was still played, Anzac Day formalities involving the public were held and court cases were still heard with the broadsheet pages of The Border Morning Mail also carrying stories of the aftermath of the Great War and concern at the spread of Bolshevism.

Australia was able to prepare for the Spanish flu with an alert from South Africa in October 1918. 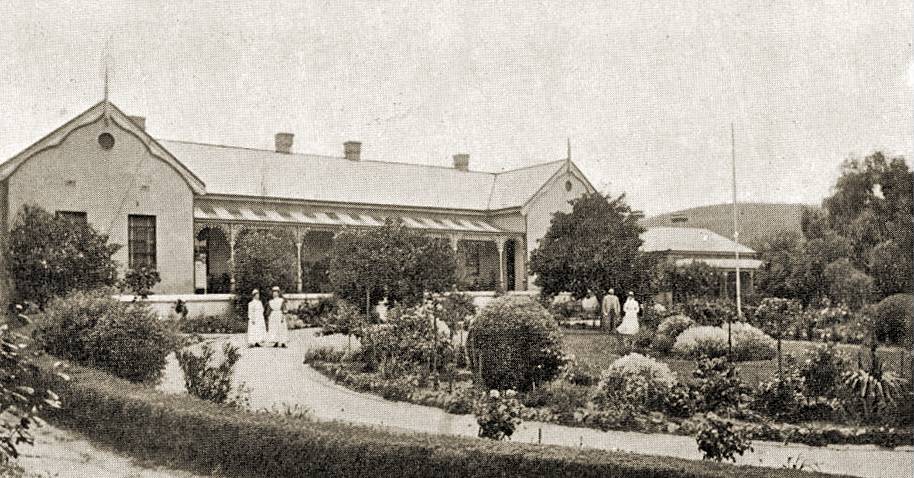 Hub: The former Albury hospital in Thurgoona Street where influenza patients were sent to convalesce. The building was razed in 1935. Picture: ALBURY LIBRARY MUSEUM COLLECTION

Inoculation clinics were set up in Albury in January 1919, but Ms Sheehan said the vaccine gave a false sense of security because it was a bacteria which moderated the flu's severity rather than halting it.

The first to die from the disease in Albury was Charles Corley, a single man who had been living at Waterstreet's hotel.

Wodonga's first fatality was William Toohey, 26, who died at a tent hospital at the city's racecourse on February 6, two days after Mr Corley expired.

Poignantly, Mr Toohey had been gassed in France in the Great War and only married his sweetheart Mary Cummins at Albury's St Patrick's Church on January 15.

They honeymooned in Melbourne where it is suspected Mr Toohey contracted the flu.

Those diagnosed in Albury were sent to what was then deemed the old hospital in Thurgoona Street, with the city's new Wodonga Place hospital having opened in 1918.

Inmates at the sportsground were kept for seven to 14 days.

In a world without the internet, let alone radio or television, internees read books, newspapers and magazines, played cricket or staged novelty races involving an egg and spoon or married ladies.

At the end of March, a Border Morning Mail article headlined 'Comic opera quarantine' was lampooning anomalies that saw some free to roam in the community while others were rounded up.

"A book could be written about the quarantine idiocy, but it would be so absurd and so ridiculous that no one would believe a word of it," the anonymous scribe opined.

"It would read more like a diary of a lunatic asylum than a narrative of facts happening in the so-called enlightened 20th century."

Another part of the NSW government's response which drew consternation was a requirement to wear a face mask if within ten miles of the state border.

Albury Chamber of Commerce president GS Allen said the "foolish and unnecessary alleged precaution had a ruinous effect on the trading community" because country people did not want to don them when they came into town for shopping.

Ms Sheehan said there was no order to wear masks in Victoria outside flu hotspots. Above: Modern day checkpoint. Police stop cars in South Australia about 25 kilometres from the Victorian border as part of a shutdown sparked by COVID-19. Picture: BORDER CHRONICLE

She said the overriding lessons from the pandemic of a century ago were the need for clear communication, hand washing and isolation.

She noted that most women who died from the Spanish flu were pregnant.

This story 1919: The last time the Victorian NSW border was closed first appeared on The Border Mail.